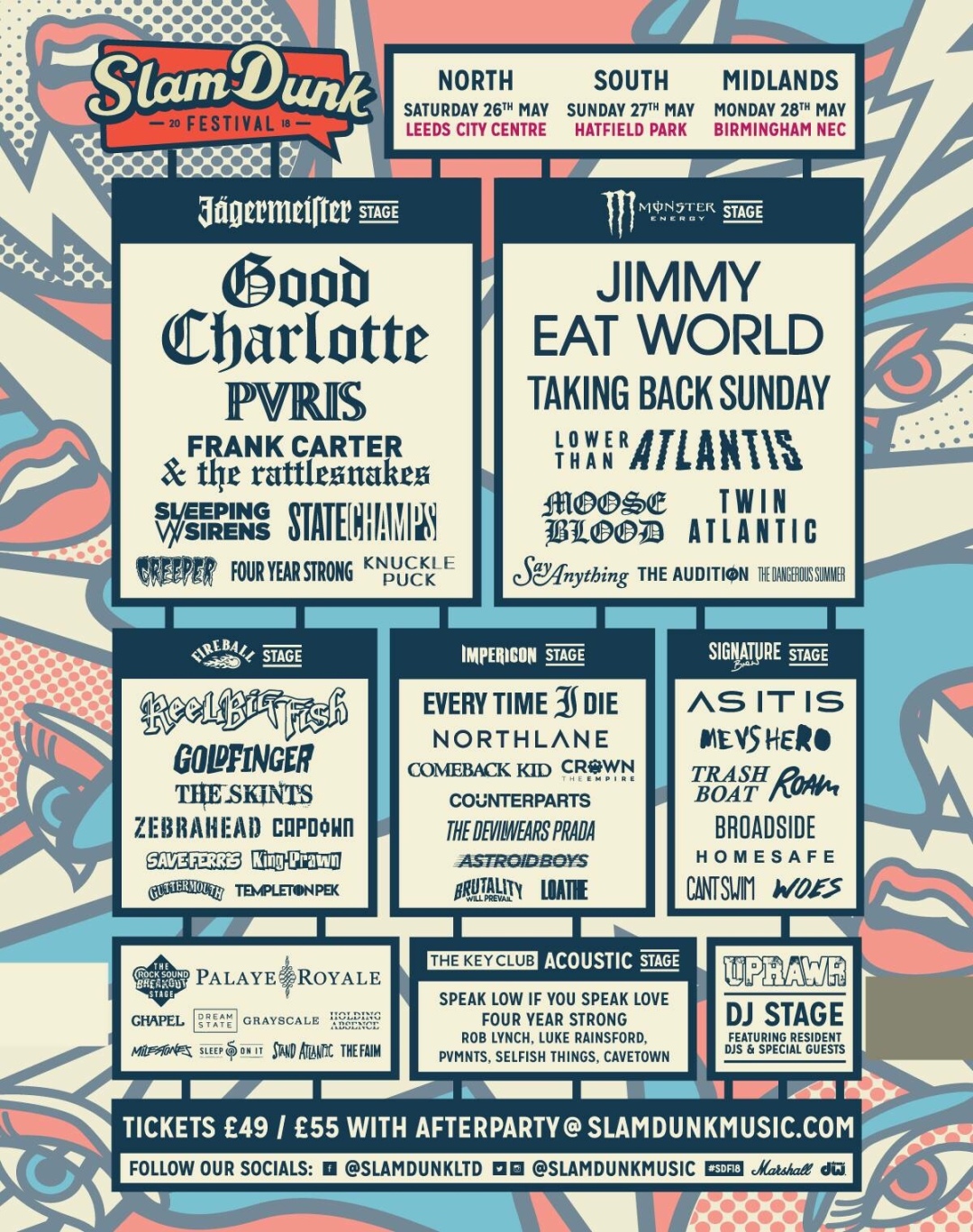 The bank holiday weekend festival is set to launch once again in less than three days, hitting the North (LEEDS) on Saturday, South (HATFIELD) on Sunday and Midlands (BIRMINGHAM) on Monday. With the festival running from 1pm-11pm (With afterparties till 3am), these are the things you should keep in mind before and during the festival

Set up a schedule and check out new bands.

50+ bands across 7 stages, there WILL be clashes. Be sure to set a schedule of the times and bands you wish to see. This can easily be done via the Slam Dunk Festival App. Also, don’t be afraid to check out bands you’ve never seen before. If you have free time, why not go to the Breakout Stage to check out some of the latest upcoming bands? Festivals are an easy way to discover new music quickly and easily, so make use of it if you can!

TIP: For bigger bands, give plenty of time to get to the stage before the act starts. Often, if a stage reaches full capacity there will be queues to get in, meaning you may not be let in when the band starts.

Only bring the essentials.

Security on all three venues this year is tight, meaning only one strap bags no bigger than an A4 sheet of paper are permitted into the venue. As this rule excludes backpacks, ensure to bring only the essential items for the day: Suncream, portable charger, money, ID and other essentials you may need for the day.

TIP: If you’re going to buy merch (honestly, who doesn’t) fold up a small cloth tote bag into your regular bag for later in the day

While some bars do take card payments, many merch stands and food stalls may only take cash. There are cash machines, however these often have long queues to save time, try and bring cash with you beforehand. Be sure to take enough money to suffice for the day and for travel to and from the festival grounds.

TIP: Bring coins along for quick drinks at the vending machines (venue dependant)

Yes, water or drinks may be a bit more expensive at the festival itself, but it’s important to keep hydrated through the festival to avoid dehydration and other illness. Festivals aren’t as much fun in the medical tents. Also, food is expensive, eat before entering the festival to cut down on hunger in the grounds. Food does accommodate for vegans and non-vegans and while you can leave the festival, food areas outside the grounds (Specifically referring to MIDLANDS) may be just as expensive as inside.

TIP: If you’re desperate for water, some of the inside bars may give you glasses of tap water for free. However, this will vary from venue to venue.

Over the bank holiday weekend, there are a few travel disruptions across the three dates which you can find below.

NORTH: Industrial action planned with a strike by Northern Rail train drivers. This will affect some lines in the Yorkshire Region

SOUTH: There will be limited trains leaving Hatfield station after the main festival ends (11pm) so ensure to leave promptly to fill the earlier trains. A queueing system will also be in place to avoid any overcrowding.

MIDLANDS: There will be no train service between Birmingham International and Birmingham New Street. Services between the two will be replaced by a bus service.

TIP: Plan your travel arrangements beforehand and make sure you have a backup in case you miss trains.

Maps for all three dates can also be found below: 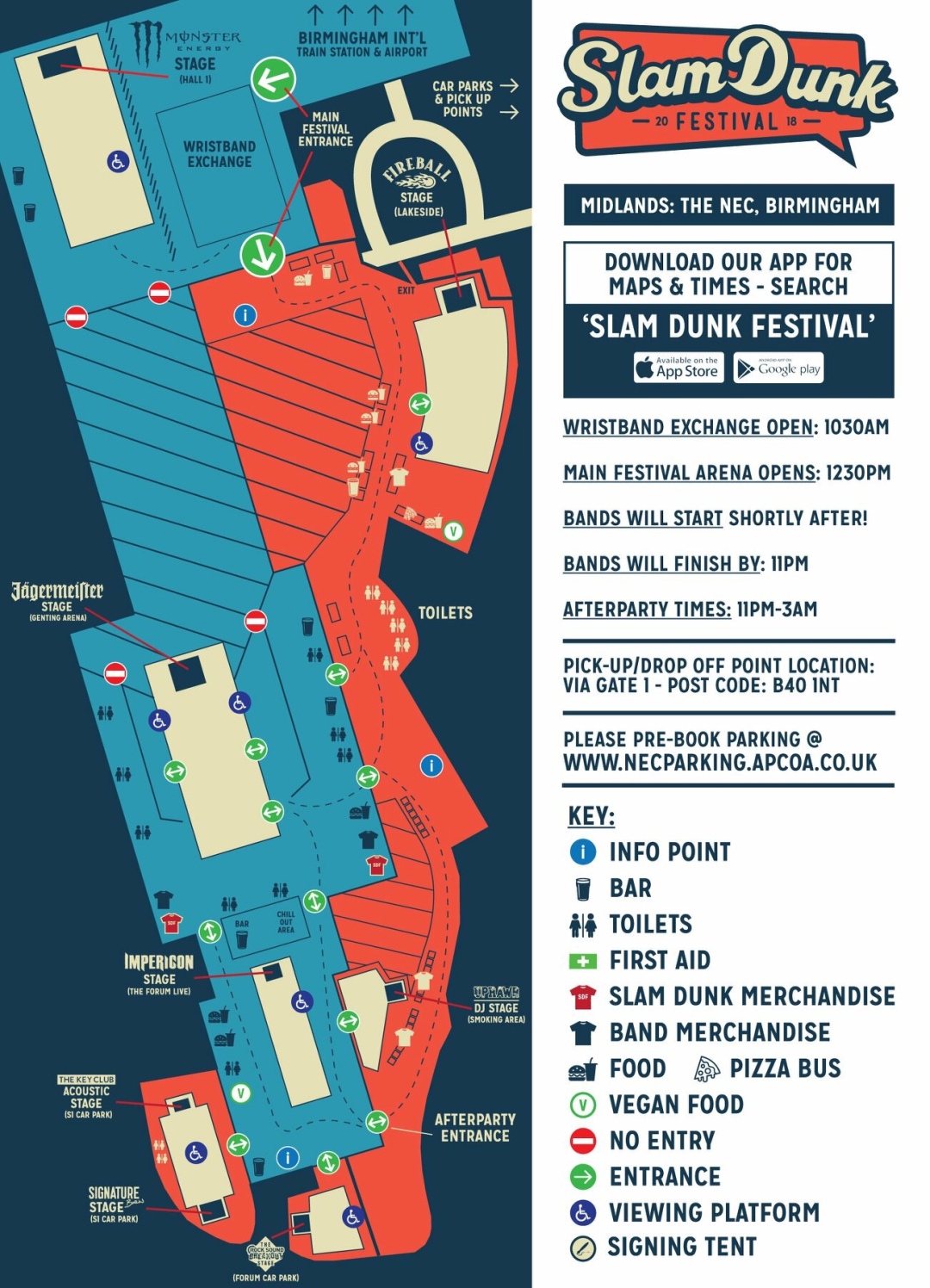 Have fun and be safe!

Most importantly have fun and be safe. Crowdsurfing/stage diving and moshing are permitted but at the participants risk. “Slam Dunk as an organisation does not condone any of these activities and will not be held accountable for injury/loss of possessions as a direct result of such activities’. If you take part in these activities and are deemed to be causing potential harm to yourself or others, you may face eviction from the festival site.

Be aware that you are banned form bringing these items into the festival and they will be confiscated upon entry.

If you see anything suspicious or need help during the festival, talk to a steward, security or official found around the site. 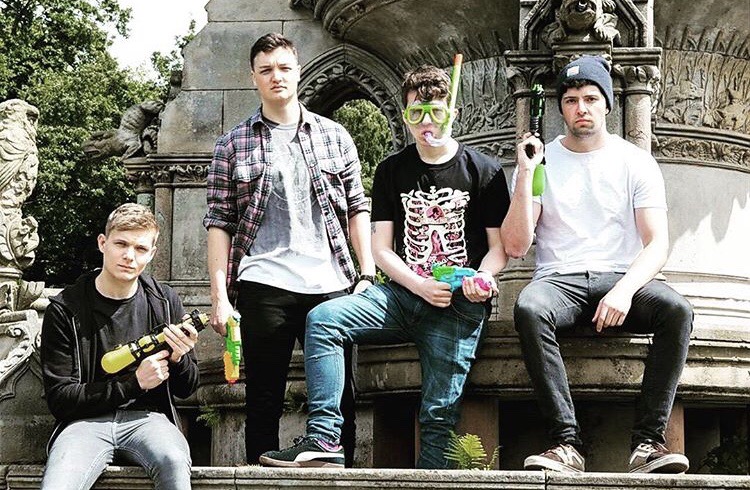 Glasgow Pop-Punkers Lost In Stereo have been announced as ‘Fireballs Hottest Band 2018’ and will be opening on the ‘Fireball-Fuelling The Fire Tour’ 2018!

Commenting on their win, the band said: “We’re very humbled to be named Fireball’s Hottest Band 2018. To play O2 Academy Glasgow and be on the same bill as Reel Big Fish, Anti-Flag, Mad Caddies and last year’s winners Sweet Little Machine – who all killed it that night – was an awesome experience and one which has really kick-started what we want to achieve with the band. Big thanks to everyone on the panel who chose us, we can’t wait to work with everyone for the coming year and appreciate the vote of confidence in our music.’

Make sure to listen below!

This years winners Lost In Stereo will be taking part in three showcases alongside 2017 winners Sweet Little Machine, as well as runners up Ghouls, River Jumpers, Eat Defeat, Better Days, Last Edition and Everyone and Anyone! Make sure to check out dates below!

~ w/ Sweet Little Machine, Lost In Stereo, Last Edition, Everyone and Anyone Describing themselves as ‘too loud for your parents, too distorted for indie kids, just right for you’, come new Leeds based grunge band Avenoir with their new single ‘The Leviathan’.

The track starts off very low and quiet, bringing a clear grunge influence style from the very start of the track. Throughout ‘Leviathan’, Avenoir cleverly build up the track from a quieter foundation into a much more developed track with heavier drumming and differentiating guitar riffs, while still capturing a simplistic style that Avenoir are trying to achieve.As for visuals for the video, the simplistic location and setting fits perfectly with the style as well as well throughout out lighting changes to accentuate various changes within the track.

Being their debut single, Avenoir have already set the bar high for further releases, bringing out a strong track that falls well into their style and what they want to achieve. Avenoir are a band that are ready to rise and aren’t afraid to make the music to do it.

British rock band Don Broco have announced the release of their new album ‘Technology’, which is to be released on February 2nd 2018 via Sharptone Records.

Want a taste of the new album? Check out their first single from ‘Technology’, ‘T-Shirt Song’ down below! END_OF_DOCUMENT_TOKEN_TO_BE_REPLACED

Chapel, the indie/synth rock duo managed by Tyler Carter (Issues), are currently rising up the ladder right now with their catchy hits and eccentric performances. The two piece consists of vocalist and guitarist Carter Hardin and drummer Kortney Grinwis who are quickly gaining popularity in END_OF_DOCUMENT_TOKEN_TO_BE_REPLACED 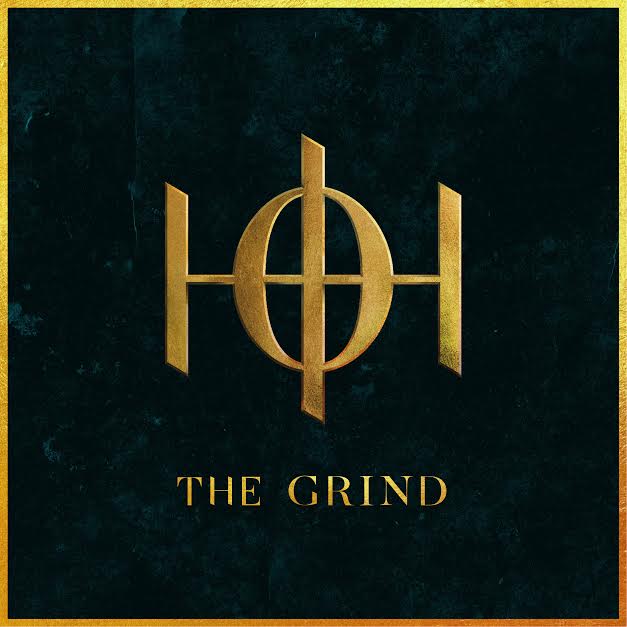 House of Hatchets are a alternative metal band based in Edinburgh, UK. After their release of EP ‘The Grind’ back in May 2017, the band have already found some popularity after being featured on one of Macho Grande Podcast’s alongside heavy metal band ‘While She Sleeps’.

END_OF_DOCUMENT_TOKEN_TO_BE_REPLACED

The heavy metal track comes from their upcoming album. The video for the headbanging tune features the band playing their track making it a nice video for audiences. Check it out down below!

END_OF_DOCUMENT_TOKEN_TO_BE_REPLACED

‘Buried Alive’ is the debut single from Florida hard rock band ‘Sky Above’. Producing a lyric video alongside, the band are prepared to rake in new fans with just this single alone.

END_OF_DOCUMENT_TOKEN_TO_BE_REPLACED 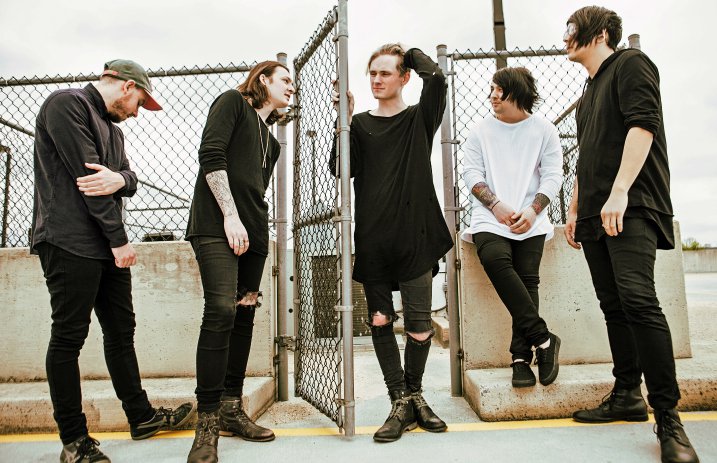 That’s right, post-hardcore band Vanish have released the track ‘Paper House’ from their debut EP ‘From Sheep To Wolves’ coming out this July!

The track itself features Spencer Charnas from well-known band Ice Nine Kills and comes after their release of ‘Dead’ shortly after their signing to Outerloop Records. 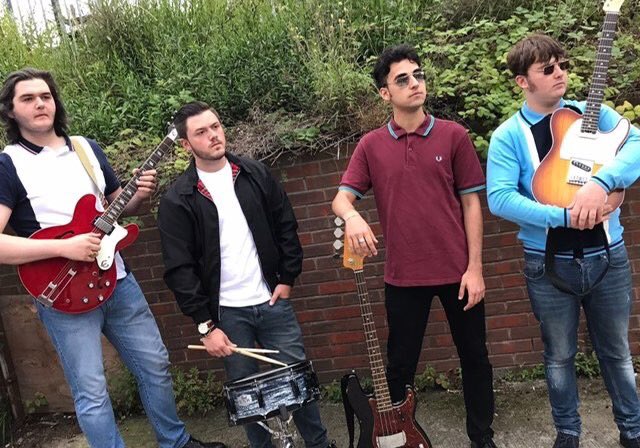 Bringing back the image of mod music are none other than London based band The UndergrounD. We got to talk to the band about their music, inspirations and scooters!