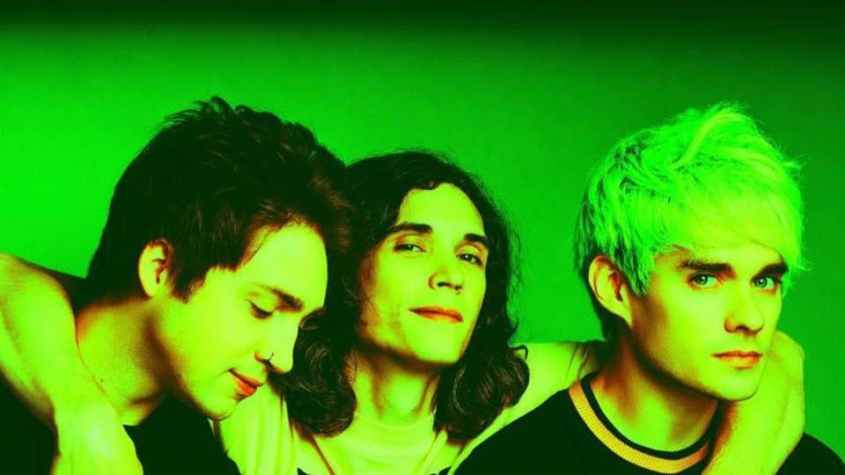 If one night selling out in 2 hours doesnt surprise you, then perhaps 2 sold out shows in Manchester might. Returning to the UK after two years are American pop/rock/alternative neon collection of genres trio Waterparks, embarking on their newest album ‘Fandom’ tour. With night 1 appearing to be a sucess over social media, theres always a possibility of a lacking show. It is safe to say this wasn’t. 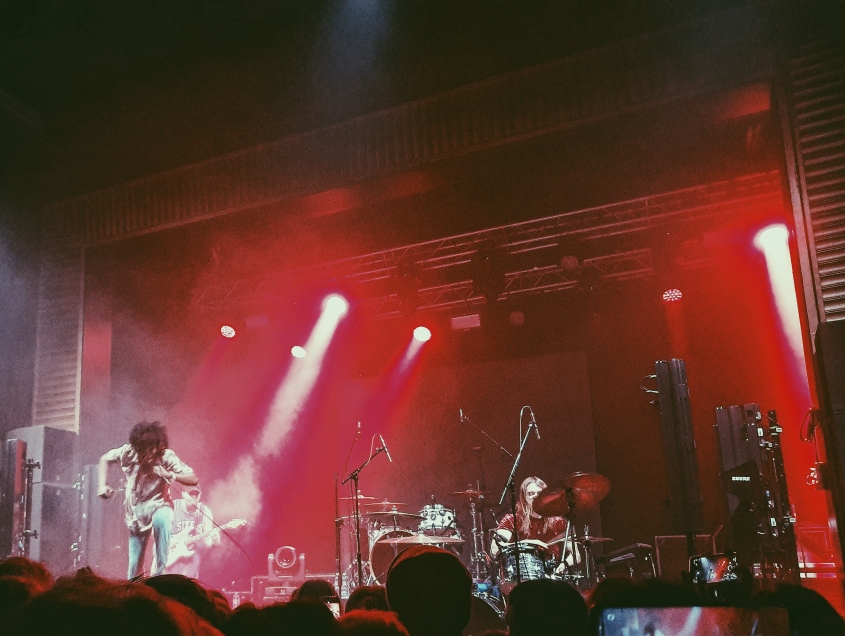 Opening the show was Texan alternative rapper De’Wayne (8), giving out a funky, hyped up start to the show. Looking back at previous supports and musical associations to Waterparks, De’Wayne is not the kind of support you would expect, but it went down extremely well among the audience (especially adhering to the audience’s excitement of being topless). Groovy, flowing and flamboyant from ‘National Anthem’ to closing track ‘Top Man’. However, the main criticism falls on the touring band. Yes, they aren’t the main focus, but an effort to look like your enjoying playing generally looks better than being bored. Granted they played well and in time, but energy lacked between the two other members. Yet, even throughout the jumping escalated madness of the set, its not all just ecstatic madness. ‘Family Tree’ slows down the set while Stooges cover ‘I Wanna Be Your Dog’ adds a diversity to the set. With the main message being bringing people together, eliminating differences, its safe to say this was achieved.

Just under two years since their last appearance in the UK, Waterparks (9) have returned for their second sold out night in Manchester’s Academy 2. With three early EP’s and 3 albums and years of touring under their belt, the group have a plethora of experience and music to showcase this time around.Vocals have been a case of hit or miss during previous tours, but this newly developed style has definitely turned that around over the last two years. Opening with the atmospheric ambience of ‘Cherry Red’ to the explosive neon noise of ‘Dream Boy’ there wasn’t a dull moment in the crowd. With ‘Watch What Happens Next’ and ‘[Reboot]’ adding an angsty edge and slower melodic tunes of ‘High Definition’ and ’Lucky People’, there was a good balance of tempo across the night, giving time to recover from the perhaps slight trauma of random pits opening up every minute. 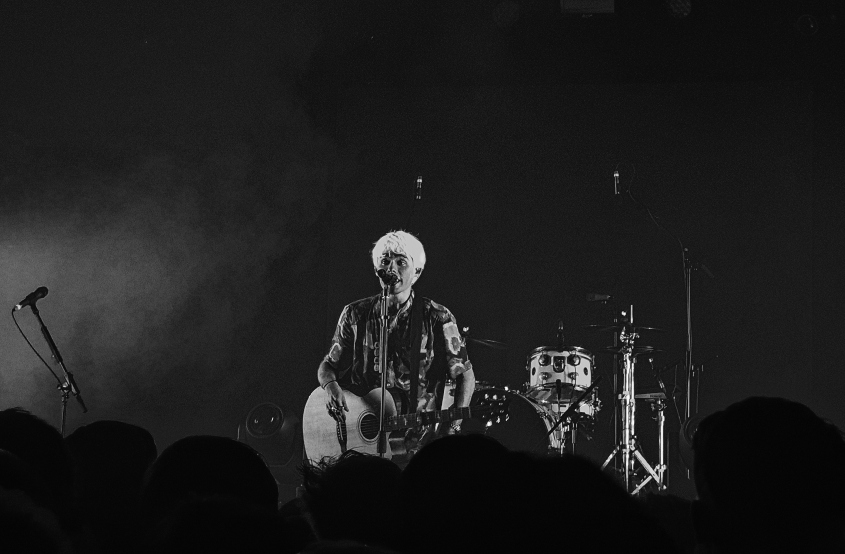 Waterparks have certainly developed an original stage performance persona with more confidence, style and ability to perform. While interpersonal communications between the band on stage was very minimal, the interaction with the audience was noticeable. While each band has a preference to the balance between the two, it was a little saddening to see the old jokes disappear between the trio. Fans were treated, or instead peer-pressured frontman Awsten Knight into playing a rare un-played acoustic rendition of ‘Telephone’, vaguely anyway. Sweet partial renditions of ‘Not Warriors’ and about 10 seconds of ‘Tantrum’ were also requested before resuming the original setlist show. Not being prepared to play these tracks, commenting on the playing ability would be harsh, but for being unprepared, getting the audience to sing instead was a good cover and also highlighted the dedication of the fanbase. 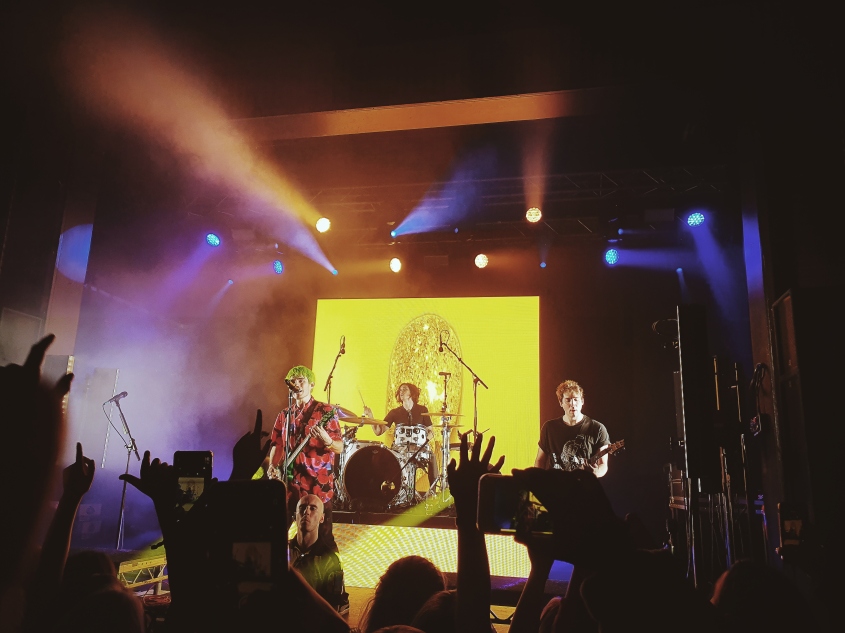 While it would have been nice to hear more fully played tracks pre-Fandom era, however with the broad difference in style and potential drama around their old music, it’s unlikely we will hear many older tracks anytime soon. However, remixes of Double Dare 2019 and Entertainment 2019 gave us a nice throwback to the earlier days of the band. Flipping between ‘Little Violence’ and ‘I’ll Always Be Around’ in DD2019 the reminiscent performance is highlighted by a montage of video clips from the bands early days. Older music may be thrown to the performance archives (and a loving hatred towards ‘Easter Egg’ being spoken of once again), but it is heart-warming to see that through their explosive fame, they haven’t lost their roots.‘Entertainment’ 2019 has less of a throwback visual interpretation, but beforehand a short film about the making of their album, the pressures they had and reasons they recorded in secret. Leading on to not so much of an encore but instead closing the show on lead ‘Fandom’ single ‘Turbulent’ went down a hit with the crowds, causing pits, crowd surfers and a multi-person pileup in said pit. 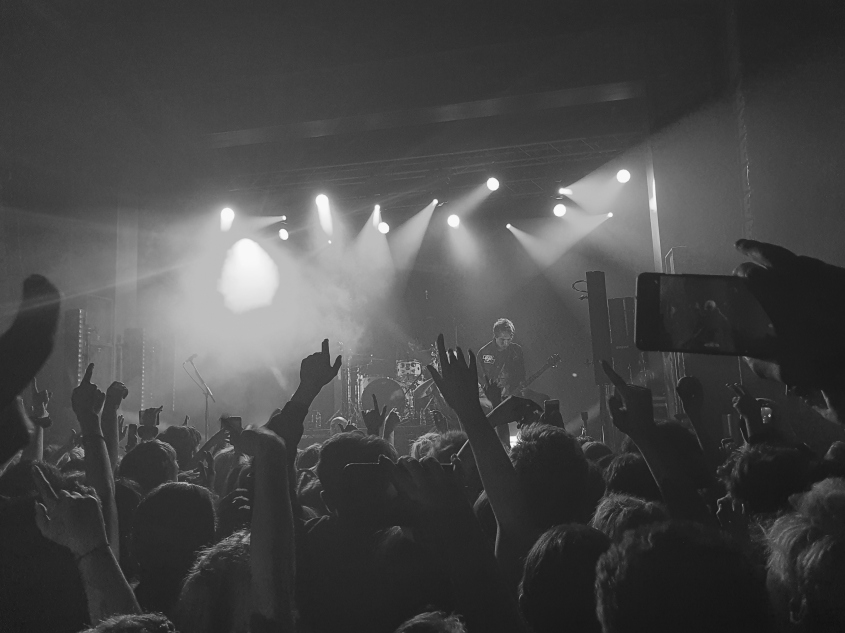 Improvements are noticeable and Waterparks have defined their style with both ‘Fandom’ and the ‘Fandom tour. It’s not what fans are used to, it’s a different wavelength that some love some don’t. You can’t win amongst fanbase opinions, so if you like what you do and its successful, do it anyway – just as Waterparks have successfully shown us.Rating: 8.5/10