Finding time to record an audio interview between Rebellion’s fire alarms spazzing out and other bands blasting audaciously loud music is a lot harder than I anticipated. After almost hitting a poor staff member with a door walking into the venue, the night was definitely starting off in a more unexpected sense.

In the rock scene, people are becoming more and more inspired to start projects of their own, spreading their thoughts and sharing their passions in their own time. Avenoir are a band created from an interesting experience – ‘we were bored’. Or, in (slightly) more serious terms – ‘me and the old guitarist were in the old band – Sammy being the fangirl was like ‘please let me jam’ so me, the guitarist and Sammy played, wrote a song and it all went well.’ so reiterated by the band’s drummer Jack Hendy. After the departure of previous guitarist George Space, ‘we were kind of panicking’, enlisting the help of friend Rob Arkle. We were expecting it to be Rob not really joining in at first trying not to step over our toes but you (rob) really got involved just went straight for it.’ Soon after, I discover this is perhaps the most serious the band will become for a large majority of the interview.

Filming a new video for their unreleased single, this music video finds Avenoir reaching a new depth of meaning in their music. ‘There’s a lot of themes of abuse and we won’t go into too much detail, but I guess this music video is a statement. We really are trying to break out now and show this can happen to anyone and to reach out.’ Commenting on his songwriting style, Sammy being the main lyricist explains ‘if there’s anything dark its either a story, character or something personal. I’ve never publicly said this before but Krakow- p is a very personal song for me. There’s a line that goes ‘I hope you know that you’ve been replaced’ and the drummers dad Chris is now a father figure to me.’ But even for such carefree people, there is a harsh reality behind the music you hear and see live ‘I always find it very hard as it brings up all those things very personal to me having to re-live them. By the 3rd or fourth gig you become kind of numb to it. That’s why Avenoir is a coping mechanism to me.’ However, in no way is Avenoir a painful experience for the band, if anything tis a sense of brotherhood – Metaphorically anyway. ‘So, you’re my brother’. Sammy’s quick realisation of the situation plays out into a very strange conversation of ‘Noncey incest. The incest noncest’ before claiming another band playing stole their track. A slight similarity, but debatable nonetheless.

Avenoir are rowdy, reckless and rebellious, not constantly taking themselves too seriously, nor necessarily needing to. As Sammy explains ‘I write my songs at 1am huffing nail polish. I then bring it to these guys who make it better’ and each member does bring a different stylistic feature to the band. Inspirations range, with Sammy’s being ‘Tracy Beaker’ and Rob’s being ‘Basil Brush’ (maybe Green Day too’, a clear divide is felt in musical influences. Who are the band really? Without trying to build an image, Jack brings across the idea that ‘we’re not trying to be edgy we just do what we wanna do.’, that is until Sammy blesses the band with the loving emo label – ‘We are pretty emo I am wearing tights.’ Even among more serious questions that rise through the interview, Brexit and censorship, the band each put a personal twist on answers. As Rob truthfully intervenes ‘Censorship that’s a proper big thing as well especially with our music. You’re writing a lot of honest music with a lot of cursing lots of good music is like filtered out. As for Sammy, his inclusion focuses on one simple importance – The 1975. It is possible that at the time we could have even formulated a drinking game every time Sammy spoke of The 1975 (well me anyway, with the trio being underage). Passions run deep for Sammy, ‘because of their irony and their image and everything about their whole statement, nobody gets them or understands them.’ One day someone will understand, just perhaps not the remaining three people sitting on a bench in a venue bang in the middle of Deansgate. Each to their own I suppose. 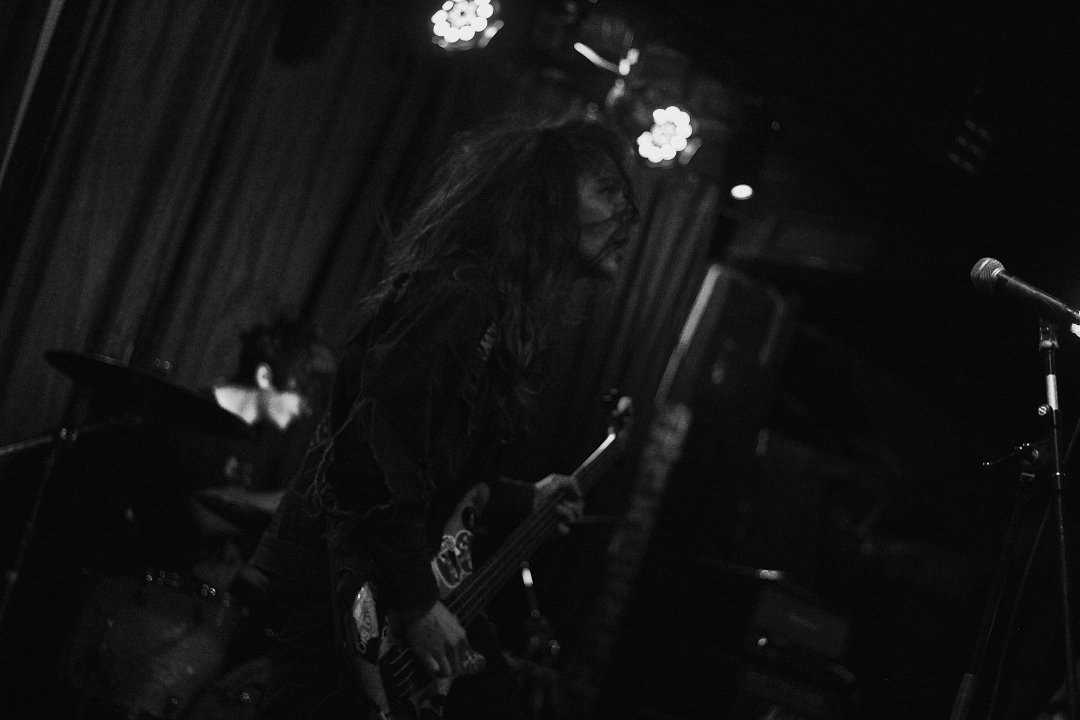 For such a young age, the group have come pretty far, but it’s also where perhaps the slight prejudice of younger bands is exposed. This is a factor even frontman Sammy is aware of. ‘I think people take us seriously when they’ve heard us and meet us. If they don’t know us and find out were 17, people put a label on us being childish and having a long way to go. I think that’s why we don’t get hired a lot and have the reputation of young kids.’ Joking aside, the group have a high level of maturity and awareness of the scene around them. An idea many people, myself included, can relate to. Even Jack stating that ‘some people don’t treat you differently, but if before they know you’re 17, they just won’t take you seriously. The fact is we know each other as musicians and we know how we play so that really helps us as musicians. I think the older we get the stronger we will become’ Of course being the band they are, it doesn’t take long before the opposing comments come through – ‘Then again, we don’t take ourselves seriously.’ Bands are often quick to defend their serious approach to music, but sometimes it can be a breath of fresh air to be able to joke around a bit. Who would have guessed talking to a small student aged band would be the most laid back, banter filled interview I’ve done? 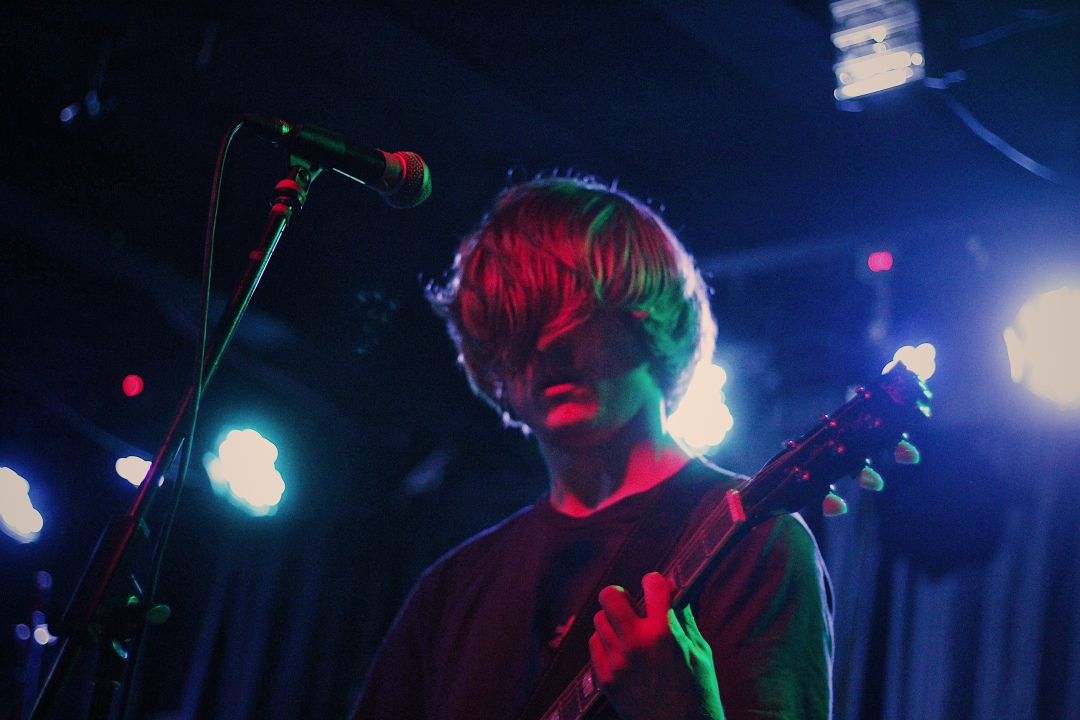 There is a more important issue on the line that is soon to arise in our 30-minute interview. As Rob states ‘I think the worst thing is jacks poor navigation skills.’ Obviously causing issues, both Rob and Sammy comment on being ten minutes late’ to a show as ‘you took us on a 40-minute detour to the motorway’, which Sammy claims ‘could have taken 5 minutes if I did it’. The culprits issue? ‘You check snapchat when you’re supposed to be the navigator! Undoubtably, the band have their occasional disagreements, the latest occurring during video filming, a day before this interview took place. The most outrageous cause being Jack causing Sammy to be ‘late for my bus’. In the true narration of the day ‘We were arguing while rob was crying in a corner. It was awkward for the Filmer.’ A message to director/cinematographer Declan, Jack and Sammy are very sorry. With the true cure for disagreements being a McDonalds, in the end, there’s always a resolution. As Sammy states ‘usually it’s me and jack that argue about things but you’re (Rob) never afraid to tell one of us when were wrong. 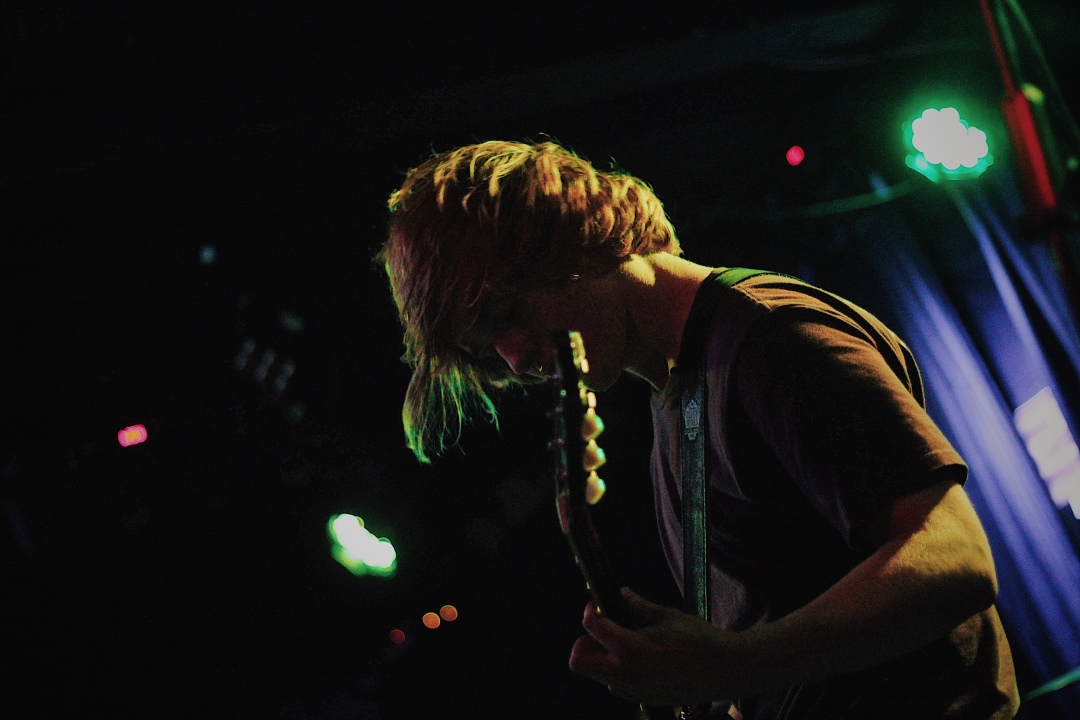 Avenoir are a band that definitely surprised me. Writing reviews of their music since their debut single last year, the band have developed musically in an upwards approach. Even live, the trio give off a tremendous amount of energy, a stage performance some more established bands could learn from. Perhaps only just breaking into Manchester, Avenoir are yet to capture the attention of the rest of the UK but trust us when we say this – they won’t stop trying.