WITH CONFIDENCE – LOVE AND LOATHING – REVIEW 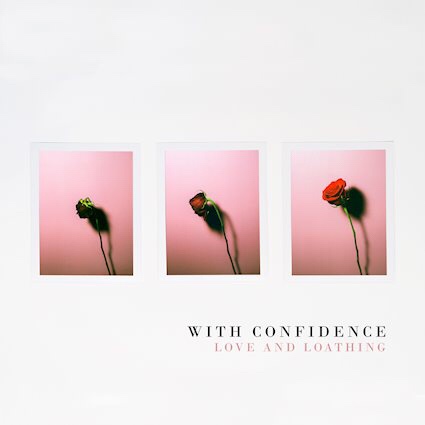 ‘Better Weather’ shot With Confidence straight up the ladder of smaller pop-punk bands trying to break through the scene. Despite a rocky start at the end of 2017 leading to this year, the Aussie pop-punk outfit have featured on the final Vans Warped Tour line-up and recorded their sophomore album ‘Love And Loathing’, ready to be released on August 10th 2018.

Undoubtedly, this new release has its fast paced, blue pop-punk style weaved throughout its entirety. Lead Single ‘That Something’ Creates an effortlessly catchy flow, with its strong choruses and upbeat instrumental backing. It’s through this tracks and other addition ‘The Turnaround’ where we see just how the musicianship can bring a track further out. The groovy basslines (Jayden Seeley) add an enjoyable flow to the songs while the headbanging riffs (Inigo Del Carmen) and matching fast drum beats (Josh Brozzesi) together create a fun summer happy track to infuse into the album.

Yet, there is an overall atmosphere through this release that this appears to be a safe approach from With Confidence. While there are the rare tracks that express a different forwarding approach to the Aussie bands predominant genre, the majority of the release sticks to a ‘safe’ pop-punk generic approach. ‘Spinning’ and ‘Dopamine’ are two examples of the side of the album that sticks a little too close to its roots. Even single ‘Jaded’, while having its fun feel similar to ‘That Something’ just falls into a safe trap to avoid unpopularity. However, this isn’t to say there aren’t track that make a clear breech to this idea.

On ‘Love And Loathing’, there are three tracks that truly make a stand among the rest. ‘Bruise’ sets itself as the slower ballad of the album, slowing down the pace while feeding a lighter influence into its lyrics. Even the emotional vulnerability presented in such an open format explores a side to With Confidence that could have been lost through the hype of such upbeat tracks – thankfully it came through. ‘Paquarette (Without Me)’ once again explores a much lighter touch, drifting away from the first tracks of the release. The trio aren’t entirely sticking to the safety of the core of pop-punk, this song proves it. They just need to confidence to step further out of their boundary and ‘Icarus’ is the first example of this step forward. This track is possibly one of the most diverse fast paced inputs on the album, with a much heavier rock influence weaved through each segment of the track. With Confidence have that potential to step away from these safer approaches, ‘Better Weather’ proved that and these three tracks do as well.

With Confidence have had a struggle, which may have pushed they further into their shell to escape rejection and disappointment. This album has happy summer tracks and emotional outpourings and this amplified by 10, can truly set this group skyrocketing. Here’s to their next release because we know they will go further.