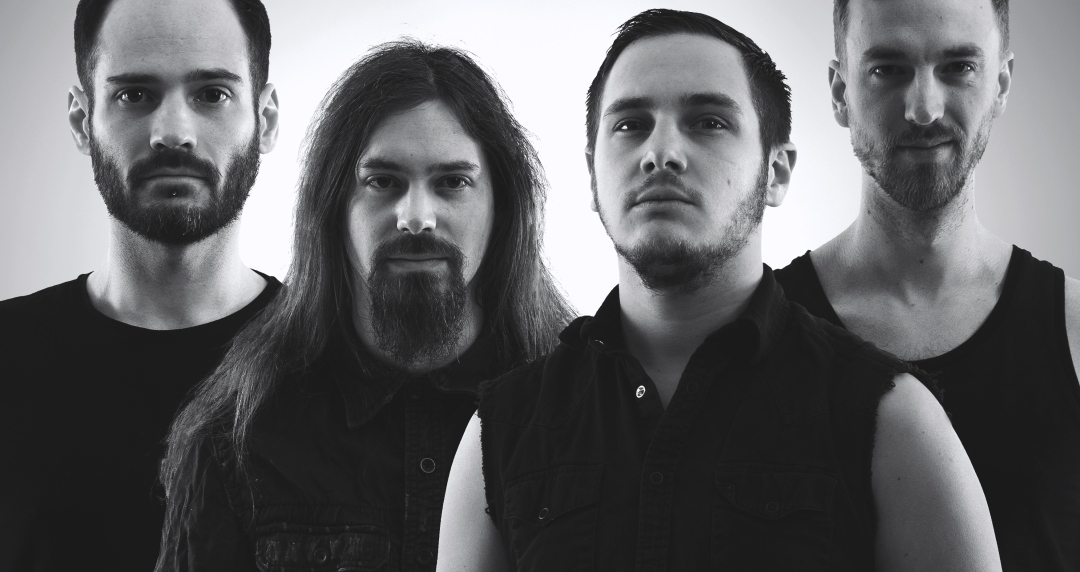 Hey! Could you please introduce yourself and your role in the band for our readers?

Milan: I am the lead guitarist of Neverland In Ashes. I also do all the recordings and pre pros, write the lyrics and do a lot of the songwriting. And I mostly do the booking for shows.

Julez: I am the rhythm guitarist and singer of the band. I am also in charge of logistics for the liveshows and plan the show onstage. And of course do some of the songwriting!

How did Neverland In Ashes come together as a band?

Milan: I started the band in 2007 with our former singer Chris, who is the one singing on our previous records “8:16” and “Earth: June”. Our current singer/ guitarist Julez is the only one left in the lineup from back then, even though, he started out on the drums in 2007 and then switched over to guitar in 2010.  When Chris left in 2012, we tried a few other singers and then decided to go with an internal solution and let Julez also do the singing in addition to the rhythm guitars. The lineup changes threw us a bit off track though, because it took us about a year until we had it all figured out again and could get back to playing live. Then we started to write new songs, which is, why it took us almost five years to make a new record.

So, you just released your new album ‘Conversations’, can you tell us a little bit about the writing and recording process?

Milan: It usually starts out with someone having a more or less finished idea of a song that we record a demo of in my studio.

For example, I constantly record ideas and work on them, until they’re almost finished songs and then send it to the others. It might also just be some melodies that I get from someone else in the band and work it out into a song. Or someone else in the band writes a whole song and we just record the demo. On some of the tracks, I had some rough ideas and sat down with Julez and we would work on the songs together. Then we all tweak it and everyone works out their parts until we’re happy with the result.

Once that’s done, I write the lyrics to the song. Julez and I then meet up to record the demo vocals and try out a few ideas and singing melodies and change the lyrics until it all fits together in a way that we like it.

About half way through the writing process, we had a pretty good idea of what the album should sound like and what kind of songs we would need, to make it great and keep it interesting through the whole record.

It’s been just over 5 years since your last full release of ‘Earth: June’ back in 2011, do you feel you have progressed musically in this time?

Milan: Yes! Definitely! I would even say, we’re a different band than in 2011, because so much has changed. The lineup has changed drastically. With Chris, one of the main songwriters of the band has left and Julez and Mario (the drummer) had never written any songs for Neverland In Ashes before this record. And I would also say that we have gotten much better at songwriting and on our instruments, as well.

Which songs off ‘Conversations’ are you each most proud of and why?

Milan: I personally am the most proud of “Supernova” because, to me, it is the most complete song on the record. It has a good songstructure, good riffs, a good tension between the parts, the transitions form part to part are good, some sing-along-lyrics and some great melodies. I also like, how the lyrics to the song turned out and I especially like the way Julez is singing in the Chorus!

Julez: I am also the most proud of “Supernova” because of the good melodies and I think, it represents Neverland In Ashes the most!

Were there any tracks that didn’t make it on to the album?

Milan: Yes! We wrote two or three more songs that didn’t cut it, because we felt the other songs were either better or these were too similar to some that were already on the album.

Being a band for such a long time means you must have some great experiences, what is the best experience you guys have had as a band?

Milan: The best experiences are almost always on stage in front of a large crowd when you can see in their eyes that they really enjoy the music that we’re doing and sing along to the lyrics! But we’ve had some incredible experiences backstage as well, of course, since we’re all good friends off stage, as well! It’s always fun to spend time together!

Are there any plans of touring outside of Germany soon?

Milan: We don’t have anything planned. Bookers can hit us up with serious inquiries at any time, though!

Is there anything else you would like to say to the readers?

Milan: Thank you to everyone for their support so far! If you have anything you would like to ask us, please just drop us a message through Facebook or Instagram! And if you haven’t heard of us yet, please check out our album “Conversations”!

Make sure to check out Neverland In Ashes at: http://www.neverlandinashes.de/